The shimmer in the air often seen above a hot road is one example of a scintillation. This optical effect is brought about by turbulent eddies that transport heat and water vapor causing fluctuations in the refractive index of air which results in the random bending and focusing/defocusing of light rays. A scintillometer is a horizontal probing remote sensing instrument that consists of a transmitter and receiver that measures the intensity of the scintillation effects and relates that back to the fluxes that causes them. Different types of scintillometers exist based on the different wavelengths used and the different aperture diameters needed which affects the path length over which the scintillometers can be operated.
We will use a short-path (~100m) laser scintillometer. The added value of this scintillometer over the more traditional Eddy Covariance (EC) method is that the scintillometer converges to statistically stable flux estimates at much shorter flux averaging times of 1 minute or less (see CANOPY), while the EC technique typically requires flux averaging times of 10 to 30-minutes. 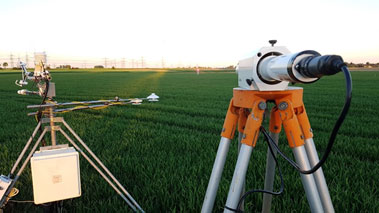